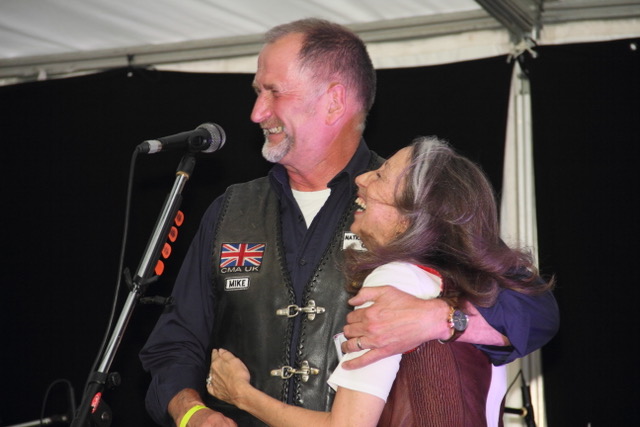 29th-31st March, Sandy and I attended the CMA European Leaders Conference hosted by CMA Germany the venue was Buchenau Castle, near Frankfurt. Ian Cameron and Penny Lowery also attended the conference. We had a large turnout and discussed issues that countries had faced. I was asked to preach and based it upon the story of Absalom stealing David’s throne (2 Samuel Ch15-19). John Ogden Jr. and his wife Holly from the USA International Team led the weekend.

9th-16th April I was again invited by Spring Harvest to attend two days of each of the Minehead weeks and two days at the Skegness site, they kindly covered my fuel, accommodation and meals on site. I was joined by members of nearby branches and had a bike display near the entrance to the main venue – we promoted the Bikers Week at Le Pas Opton (Spring Harvest’s French holiday park in the Vendee) and the ministry of CMA. As usual we had a wonderful response and many people showed interest in knowing more about CMA. These opportunities have developed close friendships within Spring Harvest, who knows what God has planned.

26th-28th April - Sandy and I attended the CMA National Fellowship Weekend & AGM at Aintree in Liverpool. The North Cheshire Branch did a great job hosting the weekend and a decent number of members and supporters from across the UK attended despite gale force winds and rain. During the Church service on Sunday I was invited to give an overview of the ministry of CMA and we were made to feel very welcome.

3rd May – I attended the MAG Into The Valley Rally at Sledmere House near Driffield, it gave me an opportunity to spend time with the East Yorkshire branch members and connect with those I know in MAG leadership. I did a shift on the main entrance interacting with bikers – it’s amazing how God uses us in the most unlikely places.

4th May - My time at Into The Valley was limited because I wanted to attend the funeral of Rev. Paul Sinclair on Saturday morning at Measham in Nottinghamshire. Paul was well known for his sidecar hearse funerals and was a good friend to many in CMA.

5th May – I was invited to speak at a youth camp in North Yorkshire about ‘Why should we be like Jesus’ disciples?’

9th May – Due to issues that had arisen in the SW I rode 480 miles to meet with a local bike club we received a very warm welcome, the Lord intervened and the problem was sorted out.

15th-19th May - I supported the Northern Ireland Branch at the NW 200 Road Races. We have a CMA outreach stand in the main race paddock with thousands of race fans passing by each day.

23rd May – I was asked to take the funeral of Jean the wife of Bill – Bill was a motorcyclist and ten years ago had a terminal illness and received a Bikers Bible from me two months prior to his death. The family asked me to take his funeral when he died. Apparently Jean had told her family that when she died she would like me to take her funeral. It was a huge privilege.

26th May – I was invited to preach at a CMA service at Hope Whitby (a church recently affiliated to CMA).

29th May – 6th June – I attended the Isle of Man TT Road Races. I was invited to preach at Sulby Methodist Church for Mad Sunday, followed by their annual barbecue attended by numerous bikers. During my time on the island I was able to connect with local ministers and Christians. The weather was atrocious and our Biker Bible stand at Ramsey Sprint had to be cancelled. As in past years God led me to individual bikers to share His love on a one to one basis. I have been asked to preach at Union Mills on Mad Sunday evening next year. The husband and wife Methodist ministers there have become CMA members and Carlisle branch are working with the Steve Parker from the IOM to re-establish a branch on the island.

18th June Sandy and I put our white BMW GS 1200 Adventure up for sale on the internet and Sergio from Portugal flew to the UK, bought it and rode home. He asked me what difference Jesus had made in my life!! I had the privilege of giving him a Portuguese Biker Bible and praying for his safe journey home. God can bring a biker from Portugal all the way to North Yorkshire to buy a bike but little did he know it was God’s Love reaching out.

20th-23rd June – I led the CMA team at the Farmyard Party Rally – it went very well except that we were targeted by a team passing fake £20 notes. I’m praying for the salvation of those who were responsible.

28th-30th June – Sandy and I attended the wedding of Kenny and Adela from Forth and Tay Branch in Dundee.