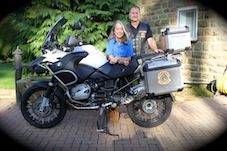 I met with leaders of the Refuel Worship Band. We discussed the plans for the EMC Rally.

I received a warm welcome at the Thames Valley Branch meeting they are making great progress.

In November I organised the annual CMA NE Bike Show Trip to the NEC International Motorcycle Show The day went well and gave me opportunity to meet up with CMA members, many of the vendors I know and the non Christian Bikers who come with us each year. Three new guys all took biker bibles.

In December I attended the CMA Scottish House Party At Arbroath organised by Amy, it was a very successful weekend with great fellowship and a chance to interact with local Christians and non Christians at the centre’s Christmas fair. On the Sunday I was invited to preach at Hillbank Evangelical Church in Dundee on the theme of ‘Jesus is Risen’.

Near to Christmas I was invited to speak At five primary schools in Whitby about the Birth of Jesus, it was a great opportunity.

The on-going problems we have faced in CMA This took up a great deal of my time and energy for months on end and prevented me from performing my normal role. It wasn’t unusual to spend eight hours a day addressing emails that caused a great deal of unnecessary stress and anguish. We have learnt many lessons from this experience that have given us insight should anything like this happen again. The outcome of the SGM in January was a great encouragement. Deuteronomy Ch33 v27 ‘The Eternal God is my Refuge and underneath are the Everlasting Arms.’

I organised and led the NE Regional Day at Boston Spa Methodist Church, West Yorkshire, Considering it was the week after the National SGM we had an excellent turnout numbering 35. We planned the day to be a time of encouragement and sharing, many contributed saying it had been a great success.

Late January Sandy and I were invited to attend the East Midlands Late Christmas Dinner, It was a great privilege to meet up with everyone and the food was excellent.

February 6th I travelled to Norwich in Norfolk To attend the Branch AGM as it re-launched with a new Chairman, the evening was very positive and good to see them moving forward.

In February I had some meetings with individual members Who wanted to discuss the issues faced by CMA in recent months.

I continue to support Les Jones as the plans for the EMC progress We are excited about the rally and pray for God’s blessing throughout.

I attended a CMA fellowship weekend in North Yorkshire, Which gave opportunity to encourage members and supporters who were affected by the recent issues facing CMA UK.

The weekend of the 22nd-24th February Saw the National Executive and Trustees travelling to World Horizons Mission base in Llanelli South Wales for our annual envisioning weekend. This was a positive time including a debrief of the problems. We are very grateful to WH for their hospitality. On the Sunday morning we attended Ty Gwyn Community Church in Llanelli – I was invited to share again during the service.

In March I was asked to take the funeral of a local Christian Biker I knew, who was a member of CMA in the late 80’s early 90’s. The day was a great success and the family were encouraged that I could help them celebrate his life.

On Sunday 17th March I preached morning and evening at two churches relating to CMA’s ministry. In the morning ten people responded to a call based on the Great Commission and in the evening two men came forward for healing.

All CMA European Country leaders have been invited to attend a CMA European Conference which will take place between 29th-31st March 2019 in Buchenau, Germany. Sandy and I shall be attending; I have been asked to speak on two occasions.

In April I have been invited to attend all three sites of Spring Harvest (2 x Minehead and 1 x Skegness) I shall have a small team on each occasion to assist me in promoting the Le Pas Opton Bikers Week in France and the ministry of CMA. Spring Harvest kindly covers all my expenses during this time.

Compared with past reports this may appear a little sparse, this is due to the months of office based work addressing problems in CMA.