In the weeks leading up to the National Rally in July I laid aside time in my diary to prepare my sermons etc. – it was very beneficial.

On Tuesday 10th July Sandy and I were invited to the Premier Radio studios in central London – I was interviewed by Loretta Andrews for the Premier Drive show covering my testimony and the ministry of CMA – Loretta was easy to talk to and we didn’t have to make any changes. I have been very encouraged by non - Christian friends and family that listened to the broadcast and were challenged. We pray that as a result of this invitation souls are saved and CMA gains new members.

We attended the CMA UK National Rally at Lenchwood Christian Centre, Evesham, on site between Wednesday 18th -22nd July; I preached twice during the weekend. This year the rally had a relaxed feel as the tasks were taken on by willing ‘servant hearts’ we were blessed by members of CMA Netherlands, CMA Belgium and Soldiers For Christ Belgium who joined us again this year.

On Wednesday 1st August Sandy and I travelled to the European Motorcyclists For Christ Rally (EMC Rally) hosted by CMA Netherlands, there was an excellent turn out from the UK we counted approximately 60 members/supporters. The rally went well with a good turn out from 15 European clubs, the numbers were a little lower than expected but the site was quite expensive and that may have had a knock on effect. I was invited to preach and lead communion on Sunday morning – I spoke on our thirst for God. Numerous people said they were challenged. I also took part in the Presidents Meeting during the rally.

Following the EMC Rally Sandy and I took leave to relax with our family.

On Thursday 23rd August I rode to Studio Scotland film studios near Edinburgh and was interviewed regarding my testimony and the ministry of CMA, this is a web based Christian programme that is broadcast in many countries. Again we pray for conversions and new members for CMA.

Following my time at the studios I rode north to Thunder In The Glen HOG Rally in Aviemore to join the CMA team running Holy Joes in the campground. It was a very successful weekend and we had some great opportunities to pray with people and share the Gospel.

I attended Stormin the Castle MAG Rally between 30th August to 1st September – our team this year did a great job and lives were impacted. MAG Leaders commented on CMA’s contribution and how much they appreciate us being on site.

On Thursday 13th September Sandy and I travelle 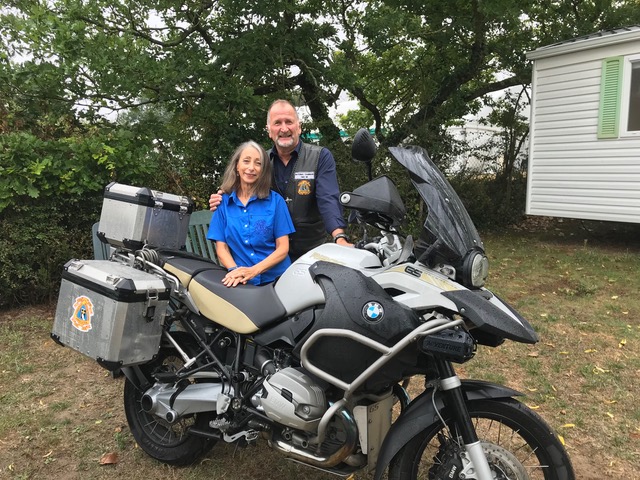 d to France to be the speakers at the Bikers Week hosted by Spring Harvest at their holiday centre Le Pas Opton in the Vendee. We had three nights break before the start of the conference to prepare ourselves. There was a tangible Presence of God at work amongst us and each day we had the privilege of praying / counselling people. We returned home on Tuesday 25th September.

On Wednesday 26th September I had to ride south in preparation for the funeral of CMA Member Len Osgood to be held in Bristol on Thursday 27th. There was an excellent turn out from CMA - Len’s wife Liz was very encouraged – we continue to pray for her and her family.

On Friday 28th September I met with Les Jones, Liz Robertson, (Rob Urand on conference call) at Lenchwood Christian Centre to debrief with the Managers Phil and Susanna – and plan for the EMC Rally 2019. It was a very positive time together.

On Saturday 29th September I led the South West Regional Day at North Street Church, Taunton, Somerset. We had 21 members/supporters attend - there was a wonderful sense of unity as we looked at subjects that would encourage us in the ministry. The highlight of the day was an open prayer time for CMA.

On Sunday 30th September I rode to Bristol to join the CMA team running a helmet stand and offering biker bibles to those who were involved in ‘Hoggin The Bridge’ a charitable event involving approximately 6,000 bikers. I left at 1pm to start my six hour ride home, the temperature dropped to 6 degrees in North Yorkshire and I arrived home safely by 7pm.

I am in constant contact with the CMA Leaders in Europe and Worldwide on a daily basis, we pray for each other - issues that arise in the respective countries – illness of members – we share ideas and encourage etc.